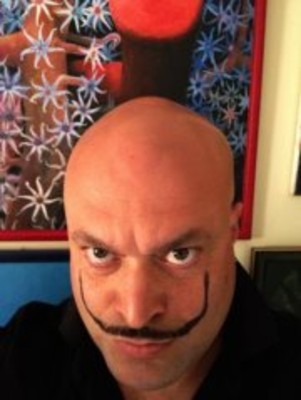 Yul Hanchas was born in Kiev, Ukraine in 1971. He finished art school and then had a great opportunity to learn more about Art at his father’s workshops, where he spent his entire childhood and after school, helping to cut and paste colored glass and at the same time studying stained glass styles.  Great Masters of iconography, sculpture, jewelry and restoration taught him. He worked with his father as art-decorator beautifying different towns of Sakhalin in the Far East of Russia. In 1992-2002 in Israel he had his own stained glass and art-forging studio, however, always continued working with oil, mixing and finding different styles until he had invented his own technique – volumetric pop art. Annually participated in the Expo, where he represented his paintings and exclusive forged interior work and had personal exhibitions in galleries in Jaffa, Italy and USA. Since 2002 he lives and works in Moscow and now, you can find his works in galleries in Moscow, Jaffa, Italy, Germany, USA and now in Spain and in several private collections of well-known people internationally.